History of the Glengarry Pipe Band

The Glengarry Pipe Band was formed in early 1961 under PM Gordon Kippen and has operated continuously since that time. The original purpose of the band was to provide a local host band for the Glengarry Highland Games in Maxville, Ontario, and the band has proudly maintained its close relationship with the Highland Games ever since. During the years that followed under successive Pipe Majors Connie Blaney and Elizabeth MacLennan they firmly established themselves as a community band playing at local parades, shows, and other events. With the arrival of Dave Danskin and Pipe Major J. T. MacKenzie , who together provided tremendous leadership and tuition, the band continued to thrive and prosper as they travelled Ontario and Eastern Canada as great musical ambassadors of Glengarry. Following Dave Danskin's retirement, PM's Roger Martin, Andrew Buchan and Steve Douglas continued to lead the band in it's pursuit of musical excellence and strong community representation.

With the arrival of Colin MacLellan as leader in 1987, the band began competing regularly in Grade 4, and was soon winning many competitions, including the North American Championship in 1987and the PPBSO Grade 4 Championship Supreme in 1989. When the band was promoted to Grade 3, there was an obvious need to start training players at a basic level, and a second junior band was formed to compete in Grade 4. Over the years, this progressive system has graduated many players from learners to the junior band and on to the senior band.

The senior band competed in Grade 2 with great success in Ontario and the United States winning a North American title and finishing 4th overall in Scotland in 1996. During this period, the junior band continued as a community and prize-winning competitive band, training many players who graduated to the senior band. Under the leadership of Ross May, the band competed at Grade 4 and Grade 3 levels from 1997 to 2001. In 2001, Colin Clansey assumed leadership of the Glengarry Pipe Band to reconstitute a senior grade competing band. The senior band continued to succeed in Grade 2, winning prizes in Canada and the US, as well as at the World Pipe Band Championship in 2004.

In 2011 the grade 2 band merged with Ottawa Police PB in order to field a more competitive band from the Eastern Ontario region. The Glengarry grade 4 band continued under the leadership of Pipe Major Ross Davison, who led the band until the end of the 2015 season. 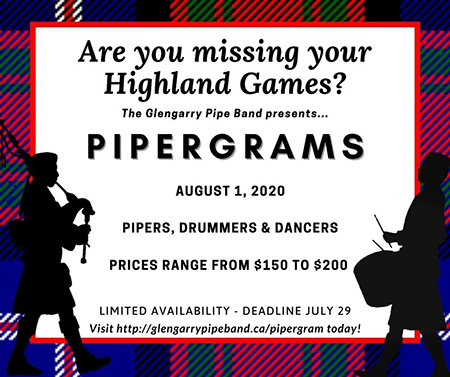 Due to Covid-19, our Band does not have any scheduled appearances


*additional appearances to be added at a later date

Whether you are a beginner piper or drummer, or an experienced player, we always welcome new members into our organization.

The Glengarry Pipe Band is supported by: